My mate Lucy Tcherniak has just mastered her most recent piece of work, for consumer tech giants Philips and their Wi-fi enabled lighting range Hue – which are remote control light bulbs that can augment the mood of a room via your mobile phone:

Discover just some of the millions of ways to use light with Philips Hue. from helping you relax or concentrate to reminding you of that perfect sunset or bringing a bedtime story to life. it can even tell you if it’ll rain later.

Earlier this year, Ars Technica ran a piece on the Hue’s free to use API & SDK, which have expanded the usefulness of these genius devices through third-party apps such as IFTTT. The article describes the full spectrum of 16 million colours, indicated below: 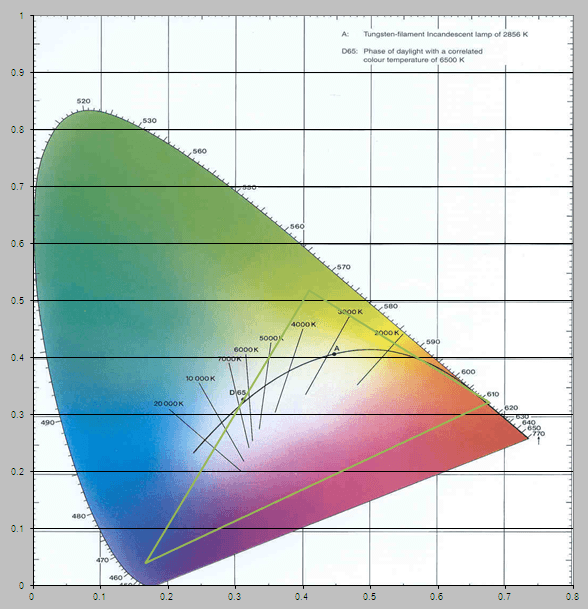 Now, of the available 16 million colours, Lucy chose to feature just 16 in her film, which highlighted at least a few cool use-cases for the Hue range. For example, adjusting from yellow to white light to improve concentration while studying, or the reverse when settling in for a quiet night on the sofa, sampling the colours of a vase of flowers to suit the room they’ll live in, reminding you to take an umbrella in the morning, or making home media more immersive for the viewer.

I can think of a few more, such as adaptive to music streaming from my Sonos, or as an alarm system for a gradual morning wake up, or flashing blue when I have a Twitter mention during a TV show. Cool system, cool advert. Not sure when it will appear on screen but I think it might make it onto a few people’s Xmas lists. I’ll certainly be asking for one!

I’ve been lucky enough to own this domain name for a number of years, and populate it with loads of content along the way. For a while, I ran a dedicated Tumblr sideblog of the same name which I have since merged into this site. More recently, I founded Digital Cortex Ltd., a formal means of handling a clutch of consultation projects. And now, this site is the front-end to my hosting business, offering virtual private server space to a few happy clients, as well as a playground for a few of the other little projects I’m working on.

Meanwhile, plenty of other people / groups / products have laid their claim to the Digital Cortex name, and I wanted to provide a quick review of them here, just for fun, but also to signpost should anyone have got lost in the ether.

A dude who’s only tweeted four times, not much else to say…
[hr]

America will never be destroyed from the outside. If we falter, and lose our freedoms, it will be because we destroyed ourselves. (Abraham Lincoln)

Makes it all the more charming that one of his playlists is called Why I Love the 80’s, doesn’t it?
[hr]

I guess this is a tattooed guy who I assume wears glasses, eats pasta, and likes beer. He describes himself as “PhD -Piled Higher Deeper enuff said 😉”
[hr]

A chap called Serhan Meewisse, a storyteller from the Netherlands, is making a film. He posted the below trailer to his YouTube channel:

About the film (autotranslated from Dutch):

Digital Cortex is a fiction story about Matt, who has just graduated from the film academy. Matt, the speed of the eternal accelerating system not keep after his studies. He gets his unattainable vision into depression and have thoughts about suicide. In desperation get Matt to his friend Andrew. Andrew may be the only solution for him.

A device that he can continue. system

Digital cortex makes the flow of information along the human visual cortex digital. Thoughts and fantasies are visual and are immediately visible on screen. Matt’s life is gaining momentum. Success is his second name. Because Matt is continuously working to become reality and fantasy begin to merge. Together his fantasy reality Matt is getting delusions and hallucinations. He stands for choice, back to his unhappy existence or lose himself in his imagination.

Sounds kind of cool – wonder if I’ll get an invite to the screening!
[hr]

Hmm… Not sure if they realise, but their web address redirects back here. Further googling suggests they might not be doing too well.
[hr]

A bit more info on what the above company does:

I recommend you also check out ‘Skull Fucker’, ‘nothing like a bowl of frosties’ and their remix of ‘Lana Del Rey – Born To Die’. They are also on Facebook and YouTube. Good shit, lads.
[hr]

Not active, but the WHOIS record indicates Brian Winn, a Professor of Telecommunication, Information Studies, and Media and Director of the Games for Entertainment and Learning (GEL) Lab at Michigan State University. We emailed a couple of years ago, and he provided some interesting backstory about the domain:

In terms of releasing digitalcortex.com, I am not interested at this point. I actually had a consulting company called Digital Cortex back in the late 90s and digitalcortex.com was the domain name for the company. Interestingly enough another company wanted the domain name and bought it for a substantial amount of money. Enough that we changed our company name and got a new domain name. Well, the story goes that a year or two later, that company went belly up in the .com crash and I bought the domain name back. I am not holding out for a big sale in the future (though I would not oppose it). I just have a sentimental connection with the domain … and I am thinking of using the name again for a new company.

Best of luck with it all, Brian.
[hr]

Digital Cortex in the US Trademark Records

The registrant was AnySoft, a tech company based in Newton, MA. From what I can dig up, their software ‘Digital Cortex 2.0′ was an approach to solving system and application interopability’ acting as a sort of software layer between various networked machines. More info here. Possibly the same guys who bought the domain from Brian Winn? Anyway, the trademark was cancelled a couple of years ago. A shame, too, because they also had this super snazzy logo:

Providing IT Solutions for local non-profits and healthcare businesses.

Digital Cortex is a small animation studio specializing in educational videos. We just completed work on ‘Echo’ a computer animated accent reduction tutor, prior to that we created a series of videos to accompany medical textbooks.

Sounds pretty cool, but couldn’t uncover any of their work.
[hr]

A deep house track, with a couple of good remixes. I really like this one.
[hr]

A mini series of interesting blog posts by Stan James, starting with this.
[hr]

Seems like there’s lots more going on behind the scenes.
[hr]

This blog has up to date information on Network Security.

Another dead IT site.
[hr]

You’d be surprised how much of my traffic comes from searches for this product!
[hr]

And that’s all I could find! Hopefully, I can remain the top site for the keyword, but if not the crown is bound to go to one of the above contenders. My money is on the trio of drum+bass producers – those search bots seem to love ’em!

Can’t wait for Toy Story 3, but in the meantime there’s this – Toyz Noize (via Fagottron)

The “Perpetual Storytelling Apparatus” is a drawing machine illustrating a never-ending story by the use of patent drawings.

The machine translates words of a text into patent drawings. Seven million patents — linked by over 22 million references — form the vocabulary. By using references to earlier patents, it is possible to find paths between arbitrary patents. They form a kind of subtext.

New visual connections and narrative layers emerge through the interweaving of the story with the depiction of technical developments.