These are my del.icio.us links for July 24th

The Internet and the mobile phone are two mighty forces that have bent contemporary culture and remade it in their form. They offer immediacy, connectivity, and social interaction of a wholly different kind. These are technologies that have brought profound changes to the ways academia consider technoscience and digital communication. Their relationship was of interest to academics in the early 1990’s, who declared that their inevitable fusion would be the beginning of the age of Ubiquitous Computing: “the shift away from computing which centered on desktop machines towards smaller multiple devices distributed throughout the space” (Weiser, 1991 in Manovich, 2006). In truth, it was the microprocessor and Moore’s Law- “the number of transistors that can be fit onto a square inch of silicon doubles every 12 months” (Stokes, 2003) that led to many of the technologies that fall under this term: laptops, PDA’s, Digital Cameras, flash memory sticks and MP3 players. Only recently have we seen mobile telephony take on the true properties of the Internet.

The HARVEE project is partially backed by Nokia Corp. which recognises its potential as a Mobile 2.0 technology: user-generated content for mobile telephony that exploits web-connectivity. Mobile 2.0 is an emerging technology thematically aligned with the better established Web 2.0. Nokia already refer to their higher-end devices as multimedia computers, rather than as mobile phones. Their next generation Smartphones will make heavy use of camera-handling systems, which is predicated on the importance of user-generated content as a means to promote social interaction. This strategic move is likely to realign Nokia Corp.’s position in the mobile telephony and entertainment markets.

Last year, more camera phones were sold than digital cameras (Future Image, 2006). Nokia have a 12 megapixel camera phone ready for release in 2009, and it will be packaged with a processing unit equal to the power of a Sony PSP (Nokia Finland: non-public product specification document). MP3 and movie players are now a standard on many handsets, stored on plug-in memory cards and viewed through increasingly higher resolution colour screens. There is a growing mobile gaming market, the fastest growing sector of the Games Industry (Entertainment & Leisure Software Publishers Association (ELSPA) sales chart). The modern mobile phone receives its information from wide-band GPRS networks allowing greater network coverage and faster data transfer. Phone calls are the primary function, but users are exploiting the multi-media capabilities of their devices in ways not previously considered. It is these factors, technologic, economic and infrastructural that provide the perfect arena for Mobile AR’s entry into play.

Mobile Internet is the natural convergence of mobile telephony and the World Wide Web, and is already a common feature of new mobile devices. Mobile Internet, I would argue, is another path leading to Mobile AR, driven by mobile users demanding more from their handsets. Mobile 2.0 is the logical development of this technology- placing the power of location-based, user-generated content into a new real-world context. Google Maps Mobile is one such application that uses network triangulation and its own Google Maps technologies to offer information, directions, restaurant reviews or even satellite images of your current location- anywhere in the world. Mobile AR could achieve this same omniscience (omnipresence?) given the recent precedent for massively multi-user collaborative projects such as Wikipedia, Flickr and Google Maps itself. These are essentially commercially built infrastructures designed to be filled with everybody’s tags, comments or other content. Mobile AR could attract this same amount of devotion if it offered such an infrastructure and real-world appeal.

There is a growing emphasis on Ubiquitous Computing devices in our time-precious world, signified by the increased sales in Smartphones and WiFi enabled laptops. Perhaps not surprisingly, Mobile Internet use has increased as users’ devices become capable of greater connectivity. Indeed, the mobile connected device is becoming the ubiquitous medium of modernity, as yet more media converge in it. It is the mobile platform’s suitability to perform certain tasks that Mobile AR can take advantage of, locating itself in the niche currently occupied by Mobile Internet. Returning to my Mixed Reality Scale, Mobile AR serves the user better than Mobile Internet currently can: providing just enough reality to exploit virtuality, Mobile AR keeps the user necessarily grounded in their physical environment as they manipulate digital elements useful to their daily lives. 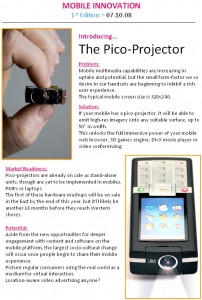 Problem:
Mobile multimedia capabilities are increasing in uptake and potential, but the small form-factor we so desire in our handsets are beginning to inhibit a rich user experience.
The typical mobile screen size is 320×240.

Solution:
If your mobile has a pico-projector, it will be able to emit high-res imagery onto any suitable surface, up to 50″ in width.
This unlocks the full immersive power of your mobile web browser, 3D games engine, DivX movie player or video conferencing.

Market Readiness:
Pico-projectors are already on sale as stand-alone units, though are yet to be implemented in mobiles, PMPs or laptops.
The first of these hardware mashups will be on sale in the East by the end of this year, but it’ll likely be another 18 months before they reach Western shores.

Potential:
Aside from the new opportunities for deeper engagement with content and software on the mobile platform, the largest socio-cultural change will occur once people begin to share their mobile experience.
Picture regular consumers using the real world as a medium for virtual interaction.
Location-aware video advertising anyone?