There’s this guy called Matthias Müller, and he makes beautiful abstractions out of virtual dust on his supercomputer. He’s some kind of motion-art superhero, probably sent to us from the exploding Planet 3DS Max by his scientist parents.

In this post I’ve picked out a few examples of his work, because as well as being simply gorgeous viewing material, they’re great examples of what’s possible with a few gigs of RAM, a graphics card and some imagination.

Probably my favourite due to it’s relative simplicity, this tech demo plays with texture in surprising ways:

This next one is so epic! Like an underwater fireworks show of electric choreographed jellyfish, or something…

Watch as millions of particles merge and blend with infinite complexity in this piece of seemingly generative fludity:

This final clip is almost a love story. Watch as two swirling masses collide, explode and dance in time with the music:

An undoubtedly talented guy, Matthias has done commercial work for Honda and Vodafone (as featured last year).  His YouTube channel is certainly worth a look, as are his lovely image renders on CGPortfolio.

I can barely get the most out of MSPaint, however…

French artist Alexandre Nicolas has produced some quite beautiful sculptures of superheroes in a foetal state. The work comprises his 2008 series: PRÉDESTINÉS, working in his preferred media acrylic and resin.

I think these pieces inherit a special fragility because we’d usually see these characters (Hulk; Silver Surfer; Batman etc) as fully-grown and badass, whereas here they are quite the opposite. Take a look:

Visit PRÉDESTINÉS for more images from this series.

Cinemetrics is the fascinating result of Frederic Brodbeck‘s bachelor graduation project at The Royal Academy of Art in the Netherlands.

As a graphic designer, Brodbeck is drawn to particular style details, but as a generative coder he’s interested in exploring the role for graphic design in analysing these same details.

He picked the medium of film as his ‘data-set’ and came up with something actually very unique: rather than analysing the meta-data around a film (i.e. from IMDB), he’s using movies themselves.

The project seeks to ‘fingerprint’ films (a bit like the recent moviebarcode site) and turn them into interactive models. The models can be manipulated to allow users to identify differences or trends in the graphics via a sexy looking interface, all of which he’s now open-sourced on GitHub.

Brodbeck defines the project as “an experiment to find out if the data that is inherent in the movie can be used to make something visible that otherwise would remain unnoticed.” It’s a really interesting area for academic inquiry, one which he set out the following goals:

Measuring and visualizing movie data to reveal the characteristics of movies and to create some sort of unique “fingerprint” for them.

Extracting and analyzing information – such as the editing structure, use of colors, speech or motion – and transform them into graphic representations, so that movies can be seen as a whole and easily be interpreted or compared.

Working experimentally and presenting the work both in print and digital media.

A side effect is that the system he’s built is great at comparing films, so as to see differences between originals and remakes; within similar genres; among a string of sequels, similar filmmaking styles or certain directors.

What’s great is the system is actually useful. It’s an infographic engine for film-buffs, and we know how popular those are, don’t we?!

Frederick, I look forward to the sequel!

Members of the Flickr group Make Something Cool Every Day are making cool things every day, in a social experiment that looks like a lot of fun.

The group’s rules are simple:

ONE upload per day.
Each piece must not have taken longer than a day to make.

So with these in mind, here is a slideshow of their submissions, best viewed fullscreen (but it can take a while to load):

So far the group has attracted 2,972 members, who’ve contributed 33,950 unique creations. That’s 11.4 submissions in total, so it’s evident people aren’t being religious about uploading every day, but what the hell.

What I find really interesting about the group is that there is very little conversation – a lowly 97 comments in total – in the main group discussion forum. All of the chatter is around individual works of art (especially the best stuff) . This tells me that viewers and contributors are far more interested in the content than in the delivery framework. Rightly so, I think.

The lesson to learn here is that despite Flickr enjoying a highly creative user base, it is very hard to engage those users with a campaign idea (and I’m not just talking advertising). Flickr just wasn’t designed for community engagement, as I’ve learned on past advertising campaigns that have used it as a platform.

But that’s OK, because people upload great art to the site every day, and the quality of comments that they do attract far outweigh Facebook’s throwaway commentary and (largely) poor photography, any day of the week.

I watched Tron Legacy this weekend.
Awesome movie, if only for the following reasons:

Despite not having the greatest storyline or script, the film has still had quite a profound effect on me thanks to its frankly mind-blowing visual identity. 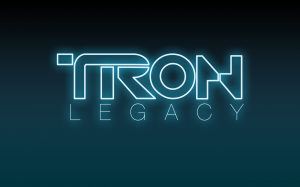 As with most of the films I watch these days, I like to do a quick post-view scan of the web to consolidate my thinking around certain plot points, characters, or to brush up on production trivia.

This time, I hit up IMDB’s forums to read others’ views on Tron’s iconography, delved into some pretty weird fan pages, and researched the history of the crew – but in all of my post-view readings, I think I’ve found the major contributing factor towards why this film looks so damn good.

This film looks so damn good, in my belief, due to Joshua T. Nimoy, a software artist who worked on the film’s procedural artwork and user interfaces, which add a thick and gooey layer of believability to both Encom’s software, and to Tron’s 3D environment.

He has this to say:

I made software art before there was Flash or Processing. Things have not grown easier or harder, they are simply different. I am not just a user of Adobe and 3D programs. I work in the source ideas from which those programs originate. If I need a new algorithm, I learn it from theories, ask one of my peers, hunt for reusable code, or invent my own way. My most contagious meme is BallDroppings. My most visible work is commercial. My artiest works have shown in serious galleries and museums.

So, here we have a guy who is just brilliant at design, working on some of the world’s coolest and most progressive brands, plus a shitload of other stuff, and who knows how to hack to achieve a great effect. Pretty much the perfect dude to lead the march at Digital Domain when they were asked to work on Tron Legacy.

Following clearance from Disney, Josh has published a fascinating piece on his site about his work on the film, which I’ve pulled some interesting thoughts from:

I spent a half year writing software art to generate special effects for Tron Legacy […] in addition to visual effects, I was asked to record myself using a unix terminal doing technologically feasible things. I took extra care in babysitting the elements through to final composite to ensure that the content would not be artistically altered beyond that feasibility. 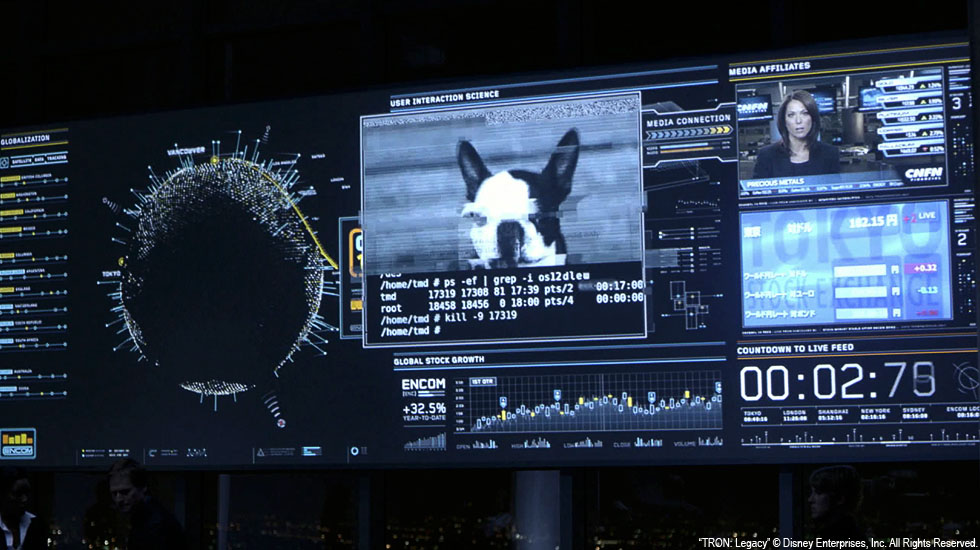 I take representing digital culture in film very seriously in lieu of having grown up in a world of very badly researched user interface greeble. I cringed during the part in Hackers (1995) when a screen saver with extruded “equations” is used to signify that the hacker has reached some sort of neural flow or ambiguous destination. I cringed for Swordfish and Jurassic Park as well. I cheered when Trinity in The Matrix used nmap and ssh (and so did you). Then I cringed again when I saw that inevitably, Hollywood had decided that nmap was the thing to use for all its hacker scenes (see Bourne Ultimatum, Die Hard 4, Girl with Dragon Tattoo, The Listening, 13: Game of Death, Battle Royale, Broken Saints, and on and on). 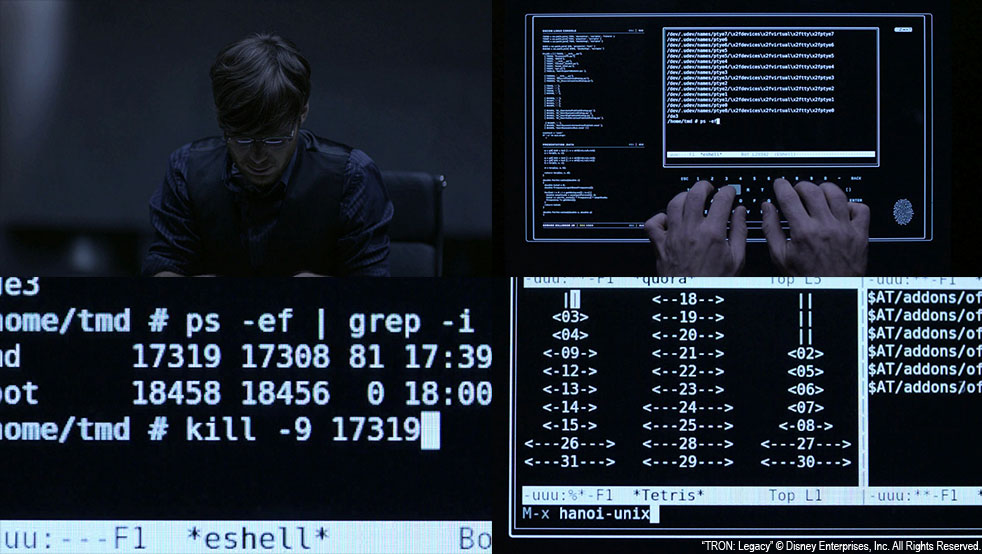 In Tron, the hacker was not supposed to be snooping around on a network; he was supposed to kill a process. So we went with posix kill and also had him pipe ps into grep. I also ended up using emacs eshell to make the terminal more l33t. The team was delighted to see my emacs performance — splitting the editor into nested panes and running different modes. I was tickled that I got emacs into a block buster movie. I actually do use emacs irl, and although I do not subscribe to alt.religion.emacs, I think that’s all incredibly relevant to the world of Tron.

Now, I don’t understand much of that last paragraph, but it’s cool to consider that there are people out there applying proper nerdery to their work, that 99.9% of people would totally miss. It just makes things better, doesn’t it?!