Had to share this stunning track, discovered via a recent Future Disco show. It’s the sort of music that just lets the mind unfold, encouraging some really powerful comments and imagery to spill out onto the pages of YouTube:

this track changed my life, this is like reborn feeling.
Im shaking and flying all the time.
I can cry and laugh at the same time.
I wonna listen to this song on the moment I die.
You spin my inner universe….thank you forever

i dont know what to do now it has finished

160 quid on discogs to buy. sounds good to me. i wont be playing it tho, il be framing it and putting it up on the wall and buying the mp3 to play. 300 copies in the whole world of this beauty. one of the finest tracks i will ever hear.

it’s 6am, and the sun is just starting to peak it’s head. the engine is purring on my white ferrarri 355 cabrio. the wind blowing through my hair, relaxed and loose from a night of dancing. i inhale on my last muratti cigarette. as the smoke fills my lungs my brain sharpens and i remember the name of the girl sitting next to me. it’s a fifteen minute drive back to the villa but i wish it could last forever. pure bliss. pachanga, boys. pachanga.

I was trying to make an awesome comment but it’s impossible. Nothing can describe the beauty of this track.

Cattaneo played this song at the end of moonpark last April 14th, and sudenly, without warning, some of my friends and myself looked at eachother, stop dancing and started hugging eachother, some of us even couldn’t help crying, it was a moment I’ll always remember, time stopped, we were there, we were happy, life had a meaning.
Thanks Pachanga boys. Thanks. 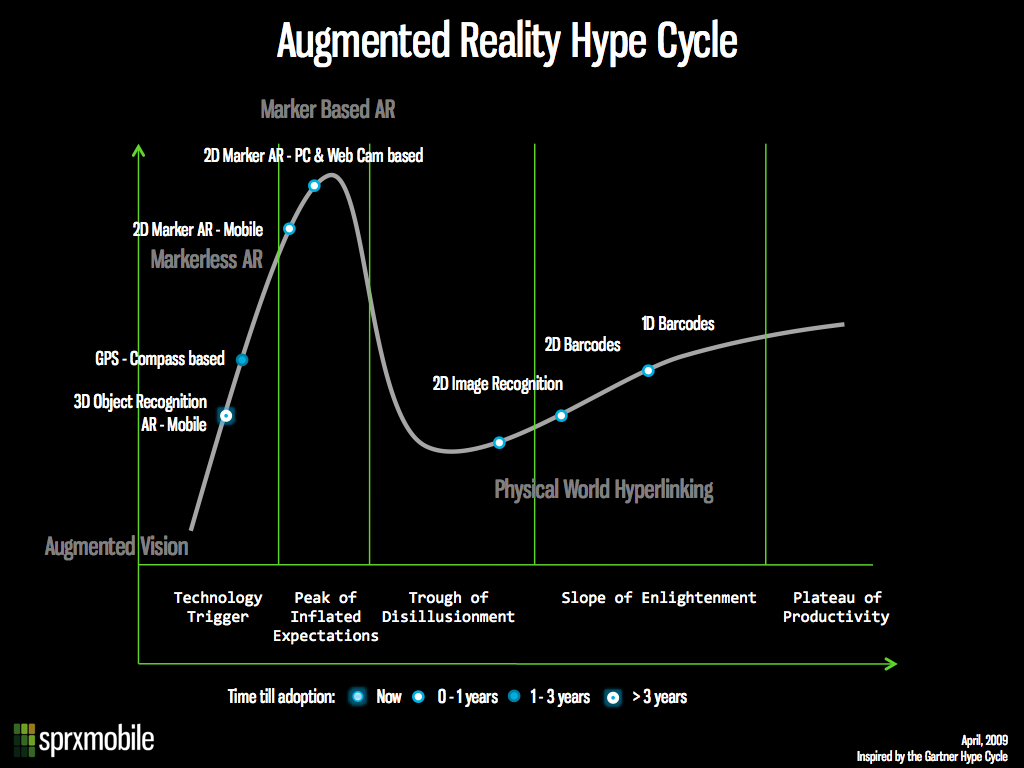 A great bit of work from SPRX Mobile has come to my attention:

Man, I’m looking forward to the Slope of Enlightenment!

However, I reckon we’re already at the Peak of Inflated Expectations, due a worldwide crash into the Trough of Dissillusionment within the next six months.

Mobile AR is still highly prototypical, and has not received much previous academic attention thus far. A deep analysis of this technology and its implications requires a specially developed methodology, a methodology which acknowledges the pre-release status of the technology, and recognises that Mobile AR represents a fusion of a number of different media technologies. Given that there is no fixed point of entry for analysis, I look to academics writing on the subject of other radical and emergent technologies that (at the time of publishing) were yet to reach the mainstream.

At this early stage of the product cycle there is an interesting interplay between fields. This interplay is assessed in Digital Play: The Interaction of Technology, Culture, and Marketing by Kline et al. (2003), and it raises some arguments useful to the further analysis of Mobile AR as a cultural artefact. One of its lessons is that assessing new technologies is fraught with a long-standing academic and cultural issue: the problem of technological determinism. The theory is that new technologies drive social, political and cultural changes, and that the perceived linearity of technical progression is somehow representative of humanity’s own progression, parallel trajectories dependent on the other’s existence. The weaknesses arise when one assigns these same values to their own assessments, which isolate the subject technology from its wider context. Indeed, it is often forgotten that in order to achieve these innovations, social, economic, political and cultural forces have all worked in collusion. Digital Play (Kline et al., 2003), quotes Leiss (1990) in an especially provoking summarisation:

“Strictly speaking, there are no imperatives in technology. The chief mistake … is to isolate one aspect (technology) of a dense network of social interactions, to consider it in abstraction from all the rest, and then relate it back to that network as an allegedly independent actor.”

Leiss’ point is that academic enquiry should seek to observe its subjects in the light of their true context. He highlights the importance of the “network” as the source of each technology, denying the idea that modern culture is ‘Under Technology’s Thumb’ (Leiss, 1990). A personal observation is that within the “network” also lie the forerunning technologies that gave rise to the newest developments, and the means to develop them further. This idea recalls McLuhan, who to the detriment of Leiss’ argument, was sometimes known as “the most famous media technological determinist” (Straubhaar & LaRose, 2005: 51) who, in reference to man’s “perpetually … modifying his technology” McLuhan (1964: 46) states that “man becomes, as it were, the sex organs of the machine world, as the bee of the plant world, enabling it to fecundate and to evolve ever new forms”. He hereby suggests a hidden complexity to human-technologic interactions, a complexity I return to later in this work. For now though, these thinkers’ opposing perspectives make a further analysis rather difficult. I recognise McLuhan’s view that there are forces at work within the “network” that need to be addressed, but accept Leiss’ view that I should view the web of interactions as a whole, in order that technological determinism cannot skew my findings. I must reconcile these perspectives in my own approach. Seeking to refrain from any dangerously deterministic hyperbole, I continue the assessment of Mobile AR as an emergent and potentially “network” enhancing new medium, but from which determinist-proof methodology?

Digital Play, though referring mainly to the digital games industry, looks into the complex dynamics between developer, distributor, market and economy. Its critical evaluation of this medium adopts a methodology that suits my own AR enquiries:

“The story of the emergence of interactive play and of its uncertain crisis-filled transformation into one of the premier industries of digital globalized capital is both exciting and revelatory. Historical perspective is vital to critical understanding. We strongly agree with Williams that it is impossible to diagnose the cultural impact of a new medium until the specific institutional circumstances of its development are understood. Moreover, critical media analysis requires historical perspective in order to argue against the deterministic view that technology “is a self-acting force which creates new ways of life [Williams, 1992: 8]”.

Now, since Mobile AR is such a new and radical technology, it is best considered in terms of other, previously radical technologies and their own timely impact. This approach recognises the emergent nature of Mobile AR technology and the lack of current research in the field, but also allows the opportunity to reflect on the implications of this technology in a relatively safe way: that is, through the lessons learned from full-fledged media. I propose that a useful lens through which to view Mobile AR is offered by an historical analysis of Mobile AR’s better established component media, with a view to producing an understanding of the implications AR holds for society. This approach allows AR to be considered as a product of a convergence of paths: technologic, academic, social and economic, providing the basis for deeper analysis as a consequence.