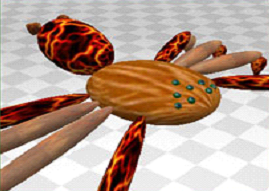 I have been aided in this series by a connection with Gameware Development Limited, a Cambridge-based commercial enterprise working in the entertainment industry. Gameware was formed in May 2003 from Creature Labs Ltd, developing for the PC games market which produced the market leading game in Artificial Intelligence (AI), Creatures. When Gameware was formed, a strategic decision was made to move away from retail products and into the provision of technical services. They now work within the Broadcasting and Mobile Telephony space in addition to the traditional PC market. I use this business as a platform to launch into a discussion of the developments current and past that could see AR become a part of contemporary life, and just why AR is such a promising technology.

Gameware’s first explorations into AR came when they were commissioned by the BBC to develop an AR engine and software toolkit for a television show to be aired on the CBBC channel. The toolkit lets children build virtual creatures or zooks at home on their PCs which are uploaded back to the BBC and assessed:

The children with the best designs are then invited to the BAMZOOKi studio to have their virtual creatures compete against each other in a purpose-built arena comprised of real and digital elements. The zooks themselves are not real, of course, but the children can see silhouettes of digital action projected onto the arena in front of them. Each camera has an auxiliary camera pointed at AR markers on the studio ceiling, meaning each camera’s exact location in relation to the simulated events can be processed in real time. The digital creatures are stitched into the footage, and are then navigable and zoomable as if they were real studio elements. No post-production is necessary. BAMZOOKi is currently in its fourth series, with repeats aired daily:

BAMZOOKi has earned Childrens BBC some of its highest viewing figures (up to 1.2 million for the Monday shows on BBC1 and around 100,000 for each of the 20 episodes shown on digital Children’s BBC), which represents a massive milestone for AR and its emergence as a mainstream media technology. The evidence shows that there is a willing audience already receptive to contemporary AR applications. Further to the viewing figures the commercial arm of the BBC, BBC Worldwide, is in talks to distribute the BAMZOOKi format across the world, with its AR engine as its biggest USP. Gameware hold the rights required to further develop their BAMZOOKi intellectual property (IP), and are currently working on a stripped down version of their complex AR engine for the mobile telephony market.

I argue, however, that Broadcast AR is not the central application of AR technologies, merely an enabler for its wider applicability in other, more potent forms of media. Mobile AR offers a new channel of distribution for a variety of media forms, and it is its flexibility as a platform that could see it become a mainstream medium. Its successful deployment and reception is reliant on a number of cooperating factors; the innovation of its developers and the quality of the actual product being just part of the overall success the imminent release.

As well as their AR research, Gameware creates innovative digital games based on their Creatures AI engine. They recently produced Creebies; a digital game for Nokia Corp. Creebies is one of the first 3D games which incorporates AI for mobile phones. Gameware’s relationship with Nokia was strengthened when Nokia named them Pro-Developers. This is a title that grants Gameware a certain advantage: access to prototype mobile devices, hardware specifications, programming tools and their own Symbian operating system (Symbian OS) for mobile platforms. It was this development in combination with their experiences with BAMZOOKi and a long-standing collaboration with Cambridge University which has led to the idea for their HARVEE project. HARVEE stands for Handheld Augmented Reality Virtual Entertainment Engine.

Their product allows full 3D virtual objects to co-exist with real objects in physical space, viewed through the AR Device, which are animated, interactive and navigable, meaning the software can make changes to the objects as required, providing much space for interesting digital content. The applications of such a tool range from simple toy products; advertising outlets; tourist information or multiplayer game applications; to complex visualisations of weather movements; collaborating on engineering or architectural problems; or even implementing massive city-wide databases of knowledge where users might ‘tag’ buildings with their own graphical labels that might be useful to other AR users. There is rich potential here.

In HARVEE, Gameware attempt to surmount the limitations of current AR hardware in order to deliver the latest in interactive reality imaging to a new and potentially huge user base. Indeed, Nokia’s own market research suggests that AR-capable Smartphones will be owned by 25% of all consumers by 2009 (Nokia Research Centre Cambridge, non-public document). Mobile AR of the type HARVEE hopes to achieve represents not only a significant technical challenge, but also a potentially revolutionary step in mobile telephony technologies and the entertainment industry.

Gameware’s HARVEE project is essentially the creation of an SDK (Software Development Kit) which will allow developers to create content deliverable via their own Mobile AR applications. The SDK is written with the developer in mind, and does the difficult work of augmenting images and information related to the content. This simple yet flexible approach opens up a space for various types of AR content created at low cost for developers and end-users. I see Mobile AR’s visibility on the open market the only impediment to its success, and I believe that its simplicity of concept could see it become a participatory mass-medium of user-generated and mainstream commercial content.